Interested in this game? Click on the banner to visit the Bloody Roar community for more information!

Bloody Roar is a series of fighting games created by Hudson Soft and developed together with Eighting. The series has been published by multiple companies, including Virgin Interactive, Activision, and Konami.

The series began in 1997 under the name Beastorizer. The game's theme incorporated anthropomorphism, where the player has the ability to transform into a half-human, half-animal creature known as a Zoanthrope (the name came from the clinical term, 'zoanthropy', which is similar to that of lycanthropy, but not just with the mind-set of a wolf). The game would appear under the name Bloody Roar when ported to the PlayStation in 1998, which would become the permanent title thereafter. There are three Bloody Roar sequels, plus a game based on a sidestory set between 3 and 4 on the Nintendo GameCube which was later ported to the Xbox.

The following is a complete list of the games in the series:

In 2008, Bloody Roar and Bloody Roar 2 was available to download in the Playstation Network for PSP and PS3.

Bloody Roar has kept somewhat the same controls over the series. A button each for both punch and kick, the beast (transform/attack) button and a fourth button that has been either a throw button, a block button, an evade button (introduced for some characters in Bloody Roar 4), and a rave button (an early version of the hyper beast in Bloody Roar 1 only).

The gameplay experience of Bloody Roar is a combination of classic and current style side scrolling fighting games such as Tekken, Soul Calibur, Guilty Gear, and Street Fighter.

Although some of the characters have remained almost identical through all four games, others have changed completely. For example, Yugo has a completely different move set in the fourth title compared to his original in the first and Bakuryu has stayed almost the same apart from a few extras which are relevant to the games evolution over time and generations.

Characters in Bloody Roar have command moves and standard moves. Standard moves are the combination style moves from games such as Tekken, where the player must press different buttons to create strings, sometimes pressing the directional pad in one of the eight directions at the same time. Command moves are special moves that require a rolling technique and inputting certain commands with the directional pad, like Street Fighter. Each character has around 14 "suggested" combination techniques listed in the manual, most of these can be varied into many different ways, allowing nearly 40 - 70 combination techniques with each character. Every character also comes with at least 8 command moves, which can be incorporated into cancel points in these standard moves or combos. These cancel points from character to character can be around 20 - 40 in each character's combo palette. These cancel points, when utilized with command moves, can then be canceled once more, allowing the player to begin a new strategy with adequate timing.

As well as this, the combat system has three types of dodging techniques, a heavy and light block that spans over three parts of the body, instead of the typical two in most fighting games, and "scratch" techniques, which can break guards from dead angles and a series of command counters, throws and vanishing attacks. Bloody Roar 4, the latest game in the series, may be the most complex of the series, with the largest fighter roster of 17 characters, and the ability to earn more moves by earning experience in "Career mode". 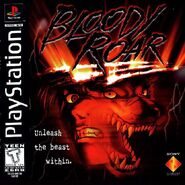 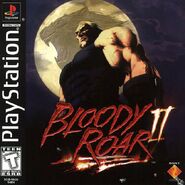 Bloody Roar Primal Fury
Add a photo to this gallery
Retrieved from "https://gameshub.fandom.com/wiki/Bloody_Roar?oldid=20902"
Community content is available under CC-BY-SA unless otherwise noted.