The story of Diablo is based on the premise of a war between Heaven and Hell. The town of Tristram is under attack by hordes of demons, pouring forth from beneath the ruined Tristram Cathedral, and the player must save the town. As the player delves into the network of Dungeons and the Caves beneath the Catacombs, he discovers more about the Demon Diablo, through large tomes that are found throughout the levels. Eventually, the player reaches the lair of Diablo and must kill him.[1]

Diablo is one of the most well-known examples of the action-RPG subgenre. Although players level up, choose character classes, and manage a variety of spells and equipment like a typical RPG, all actions are done in real time, like an action game.

The majority of commands executed in Diablo are performed by the mouse. Players click on an area of the screen to direct the character, and click on enemies to attack. However, learned spells could be assigned hot keys using the function keys on mouse-over, as well as several text exclamations (e.g. "Help me!") that could be edited in a configuration file.[2]

Diablo II also has a number of other features that enhance game play. The player has the option of hiring one of several computer controlled mercenaries, that follow the player and attack nearby enemies. On occasion, the player might find a rare, valuable item, or one that is part of a set that becomes more powerful when the entire set is collected. Items can be customized using sockets and gems, or transmuted into different items using the Horadric Cube.

Unlike Diablo I, where the monsters all stay dead once killed, and their corpses remain where they fell all throughout the game, if you save-and-exit and return to the game, all of the killed creatures have respawned. Even the boss monsters that you killed for the quest will have respawned as well.[3]

Diablo III incorporates the Havok physics engine and enables players to utilize the environment to help in their quest. For example, huge walls can be reduced to rubble to squash monsters by the Barbarian skill Seismic Slam. Even monsters use the environment which was demonstrated by Ghouls scaling the walls to reach the Barbarian. Many more parts of what appear to be a seamless background environment are destructible. Some dilapidated areas will also collapse (without harming the player in most cases) automatically when the player gets too near or passes under part of a structure.

The UI is generally the same as its predecessor, besides the graphical upgrades, and will be very familiar to Diablo II players. However, there are some differences. The health and mana globes have moved more toward the center, rather than being all the way in the corners. The stamina bar has disappeared. The experience bar is now at the bottom of the screen spanning the distance from the health globe to the mana globe.[4] 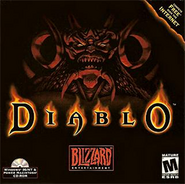 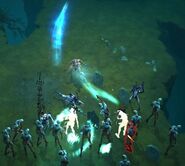 Retrieved from "https://gameshub.fandom.com/wiki/Diablo?oldid=15245"
Community content is available under CC-BY-SA unless otherwise noted.