Interested in this game? Click on the banner to visit the Marvel: Avengers Alliance community for more information!

In Marvel: Avengers Alliance players take control of an agent of S.H.I.E.L.D. and can fully customize the agent by gaining experience, leveling up, and equipping their agents with various weapons and uniforms obtained within the game. They can also team up with up to two out of the current available Marvel heroes in the game, each with their unique skills and abilities. Players start with only a few heroes, and the other heroes are locked. These heroes are needed to be recruited first by buying them with "Command Points," a currency in the game, complete Special Operations, etc.

The gameplay itself consists of turn-based fights that pit your agent and heroes against one or more waves of three or less enemies, with each character having unique attacks. There are six character classes, each with a specific strength and a specific weakness to one of the other classes, except for the class Generalist, which has neither strengths nor weaknesses. 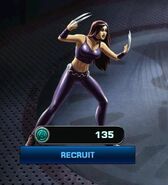 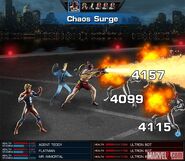 Retrieved from "https://gameshub.fandom.com/wiki/Marvel:_Avengers_Alliance?oldid=13499"
Community content is available under CC-BY-SA unless otherwise noted.