Do you have a dream to pursue a career in the video game industry? Veterans of the industry gave many tips and tricks for getting started at Wizard World Comic Con 2015 and I was lucky enough to be sent down there by Wikia to share their advice with you. Before I start, though, here are the industry veterans who you’ll be getting the advice from: 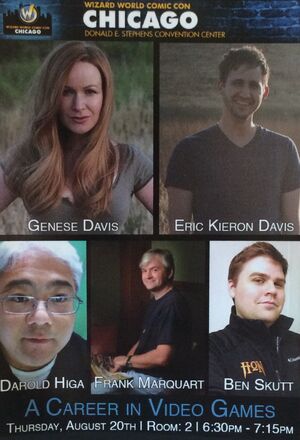 So you’re looking to enter the video game industry and pursue what many believe to be a dream job? Before you do however, you must take care to know one thing: playing games and making games are two completely different things. While you may deeply enjoy playing a game, the opposite could be true for the developing of one. As such you need to not only be passionate about making a game but also be committed to it and being flexible enough to overcome all of the challenging aspects involved in the process as well as planning for the future. When applying for jobs themselves, know that even though school is important, many looking to hire new employees will not bother to take this into consideration if you have no experience in the field you’re applying for. These people are looking for developers with portfolios that are prime and relevant and represent the person applying and what they are capable of.

This means that you are showing initiative in honing your abilities, which is done by going above and beyond through learning skills that are outside of programs and their proficiencies as well as undertaking small projects or even having a personal website that physically displays your skillset. Be prepared to keep on top of it though because stopping tells your possible employers that you weren’t committed enough to the business and that it’s not right for you. It’s understandable that you could have a career while you’re looking to enter the video game industry and that’s fine but you must be willing to gamble and put everything on the line, even if there is a chance you could succeed and fulfill your dream. While the risk may be great at first, it will be worthwhile in the end and that’ll reflect to employers in your portfolio. If you are one of the lucky few to be hired to the job of your dreams though, know that in the video game industry, communication is key. Knowing what you’re doing, working well with others, and making it fun are all things to live by in the video game industry but it means nothing if communication is ineffective. It was said that all video game developers are introverts which is probably true but in the end everyone must be willing to break out of their comfort zone and work as a team rather than being marginalized.

You should also be content with your work but never satisfied, being critical of what you’re doing and striving to do better as well as being humble enough to admit your faults and listen to other people’s opinions. You must be willing to take responsibility for your actions, even if they weren’t your own because in the end you helped resolve the situation and will be seen as the bigger person who solved the problem.

If you cannot play nice with other people or be flexible enough to change on a moment’s notice, you will not survive in the industry. Don’t let any of this dissuade you though because through it all it’s still your dream, this advice is just here to help you succeed at it.

Retrieved from "https://gameshub.fandom.com/wiki/User_blog:Awyman13/The_Secrets_of_Joining_the_Video_Game_Industry?oldid=17443"
Community content is available under CC-BY-SA unless otherwise noted.