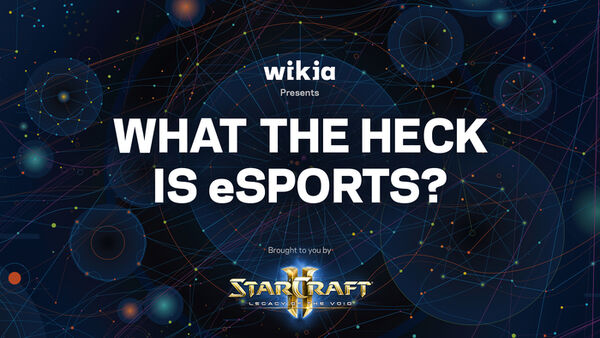 This past August, Wikia hosted a panel discussion at PAX Prime in Seattle. The topic for discussion was: What the Heck is eSports? Below you’ll find some choice questions and answers from the hour long talk, as well as some questions from the audience.

Note: Some answers have been edited for clarity.

How would you define eSports?

Trevor: eSports is really a celebration of all the games that we love to play. It’s all the players that these guys described that are competing for a ton of money to see who’s the best. In addition to that, it’s also the viewers that are out there watching those guys compete, or watching someone else play on that level. Just anyone that’s talking about the game is an eSports fan and is really celebrating what we all love about it.

How important are big personalities for the eSports scene?

Trevor: I would say, at least from our perspective, that the people are what take this digital experience and add a personal connection to it. For a viewer that’s sitting at home, if he’s just playing the game on his own, it’s him looking at his computer screen or his TV screen and it’s not very engaging. When you add in a real-life person, or a real-life shoutcaster, they’re bringing in the stories that will have different quotes or other things that come from the game.

How has increasing amounts of money involved in the prize pools changed eSports over the past few years, and why is that important?

Craig: I think having big prize purses like The International creates clear story lines that people who don’t understand it can relate to. Having a sold-out Madison Square Garden with the LCS all-star game becomes something that the outside world can attach to and validates it in their minds. I think the prize money is an important piece of that, but I think it’s also about creating an opportunity for these top players to actually make a living out of it.

How important are live events for the eSports scene?

Craig: It’s important for a couple reasons. One, for the players. There’s always the legitimacy around a live event. That’s been deeply ingrained in the culture back from arcades, and LAN parties way back when. From a competitive perspective, it’s super important. I think also what those events provide is this vehicle and a platform for fans to show how passionate they are about it. In our event in Cologne, we had 11,000 people in a sold-out stadium, we had 100 million viewing sessions online with over 1.5 million concurrents. It’s all these crazy numbers. The community responds and you build this big spectacle, and it’s just the celebration of the community and the players that are there. The events are important from that respect. It’s happening every day, all day, online.

What game mechanics translate into an entertaining eSport?

How difficult is it to be a shoutcaster?

Andrew: I think you just have to keep your viewers engaged, whether it be entertaining or informative. You just have to make the viewers with you every step of the way. I guess that’s the best way to describe it.

Is eSports a friendly space for everybody, or is that something that we need to work on?

Andrew: I think we really need to work on it. I’m a huge fan of watching Smash tournaments, but I hate watching Smash tournaments at the same time. Just seeing the poor sportsmanship that happens sometimes. People are yanking their controllers out of the console, storming off stage, not shaking hands. It’s very childish. It’s not just Smash, it happens in plenty of other games, believe me. I played League of Legends. I know everything about toxicity. It’s part of the growing pains of eSports. It’s coming from video games is that we are … and the Internet, I guess, also has that toxicity involved with it.

In what ways do you try to police or at least influence the behavior of the players because it’s reflective of the larger community?

Matt: Basically, what we’re trying to do at the Capcom pro tour was just bring everyone together and get them all working towards the same goal. Then try to lead by example. There’re always going to be heroes and villains when it comes to personalities, and that can be perfectly fine, but we need to take a stand and try to lead by example and reward good behavior. Put the spotlight on those players. That’s how we create a more positive image for the entire community, rather than having all of our events fighting each other.

How important are online events for the eSport scene, especially as a way for players to start entering the competitive scene?

Trevor: A lot of times with eSports we talk about how similar it is to regular sports and what we can learn from them. The online play is something that makes it so that eSports or gaming in general can transcend way beyond what a field sport is able to do. You’ve got players that are in the middle of nowhere Canada, they’re able to login and play and have an opportunity to find a team and make this career. Whereas otherwise, they would never be able to do that with soccer, or hockey, or something else like that.

What are you most excited to see over the next few years in eSports?

Craig: I’m excited for there to be a wider spectrum of eSports titles. I think Hearthstone is a great example of how it broadens that base and introduces people who might not have thought it was for them until what it could be. Also, the growth of the events and the energy that you feel in a stadium full of people cheering for something that you care about it is really, really exhilarating.

Questions from the audience!

How do I get into commentating for eSports, and what route should I go on to look at it as a career?

Alex: The truth of the matter is, for me it was a very random thing. It wasn’t something that I had even thought about. Of course, this was a couple years back so now people can actually start thinking about it. I think what’s important is, one: identifying the game that you want to commentate, whether that be League, Hearthstone, whatever.

The other thing is, locating the smaller guys who are producing events. ESL’s pretty big, and to say I’m going to commentate ESL next week...that took me a little while to do. Craig didn’t trust me. Then finally we got there. Locating the smaller guys who are running online tournaments on Twitch, broadcasting those things and putting yourself out there and saying, “Hey. Here’s a video of what I have. I would really like to do this.” That’s that foot in the door. You've got to put yourself out there. It’s the number on thing.

What is your take on where the future of the viewership is going to go. What medium?

Trevor: I think it really just depends on what the community is looking for. If you have a community that 100% lives online, you’re going to use one of the online broadcasters like Twitch to reach that audience. If you’re ready to expand out to people that maybe aren’t the hardcore eSports fans that we have today, moving towards something like ESPN or OJN in Korea that’s on cable TV is certainly a platform that we as the developers want to look at as much as we can. It’s just trying to reach out to the fans wherever possible.

What’s the best way for a fan to support eSports?

Craig: Don’t think you have to spend money to be a fan of eSports. Of course, money does make the world go around, but at the end of the day we need the support, we need people to tune in. Don’t do it to extreme and just clicking on the button and watching EVO, watching International, watching WCS. Whatever the case may be. That’s more than enough. If you want to take it a step further, that’s up to you.

Retrieved from "https://gameshub.fandom.com/wiki/User_blog:Knakveey/What_the_Heck_is_eSports?oldid=18395"
Community content is available under CC-BY-SA unless otherwise noted.