Even the best gaming franchises eventually come to an end. A game loses its charm, and it gets harder and harder to add new, refreshing features to a game, resulting in what is basically more of the same. While the Arkham formula has been extremely successful, the latest instalment in the series, Arkham Origins, felt very tired and was somewhat of a letdown. I did not nearly enjoy it as much as Arkham City or Arkham Asylum, and the main reason for that was the lack of anything new. The map was a rehashed version of Arkham City, and aside from some new gadgets there weren't really any new features to be excited for. But with Rocksteady back in the saddle, things seem to be taking a turn for the better in the final chapter of the Arkham series. 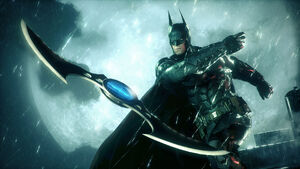 The most exciting new gameplay feature in Arkham Knight is the Batmobile. It's just not a slapped on feature that can only be used during on rails sections: the Batmobile has been made an important part of the core gameplay of Arkham Knight. For instance, the entire map has been reworked to support vehicular combat and epic car chases through the streets of Gotham (and on top of that, it's five times the size of the original map). Additionally, the Batmobile is a vital instrument during missions as it is capable of taking down walls and defeat large groups of armed goons while dodging enemy cannon shells.

Rocksteady has absolutely nailed the vehicle controls, as they feel very smooth and intuitive. The player is able to switch between a "movement" mode, which is the main driving mode that enables the afterburner, and a "battle" mode, which makes the Batmobile controls much more precise and gives the player control over the turret at the expense of speed. While cruising through Gotham you'll mostly be using the movement mode, while missions and vehicle combat requires the player to use the combat mode. 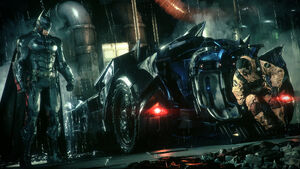 Among the new gadgets added to the Batman's arsenal is a new Batarang which serves as a sort of sensor. When thrown, this Batarang will circle around Batman's position, allowing him to scan for the location of enemies as well as hostages. While this will probably not have a major impact on the gameplay of Arkham Knight (similar to the new detective playback introduced in Arkham Origins) it does seems like a neat new addition which establishes Batman as the greatest detective once more.

The combat system that we all know and love has also been greatly improved. Batman will now make use of the environment to dispose of enemies. When the player deals a finishing blow to an enemy close to specific objects such as walls or windows, that enemy will be thrown or smashed into that object. On top of these new animations, the player is now also able to perform environmental takedowns similar to the takedowns in Sleeping Dogs. For example, if there is a fuse circuit close by the player can choose to instantly disable an enemy by throwing him into it. The new Batmobile has also been integrated into the combat system: when it is close by, the player will be able to perform instant finishers using the Batmobile's riot suppressor.

Now that Rocksteady has taken over, Batman: Arkham Knight will definitely be a fantastic game. There's no doubt the game will be a huge improvement over Batman: Arkham Origins, and there's plenty of new features to enjoy. Look forward to playing Arkham Knight somewhere in 2015.