One of developer Insomniac Games's best known franchises is the dark, gritty alien shooter Resistance. Their upcoming game Sunset Overdrive couldn't be any more different from Resistance though. Instead of shooting assault rifles at waves of enemies in a brown-gray environment, the player gets to run, jump and swing around a colorful playground reminiscent of Saints Row IV. 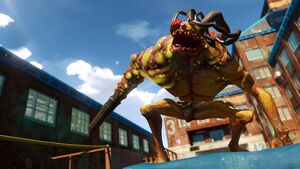 Set in the fictional Sunset City, the player is tasked with stopping a mutant outbreak caused by a faultily manufactured energy drink called Overcharge Delirium XT. The company behind the energy drink, Fizzco, is trying to hide the outbreak from the public. In the meantime, the survivors in the quarantined city have banded together in an attempt to survive the mutant onslaught. One of these groups, known as Troop Bushido, consists of boyscouts that have barricaded themselves in a Japanese centre and have adopted the way of the samurai. There's also a group of live action roleplayers that calls itself the Fargarths whose fantasies have come to life. The player has to work with these factions to stop the mutants.

These mutants only care about two things: killing people and drinking more Overcharge. As the mutants consume more Overcharge, they become more powerful and assume different forms. There's the regular Overcharge Drinkers (OD), who are weak but move in hordes. There's also the Blowers, who are capable of firing Overcharge bile projectiles at the player, and the Herkers, who have digger arms that they use to throw chunks of earth. On top of the mutant threat, there's also human bandits referred to as scabs that will attempt to kill the player and then steal their loot. The large variety of enemies ensures that gameplay is diverse, and prevents the player from using the same tactic or weapons over and over again. 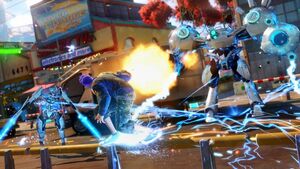 The premise of the game may have given it away: Sunset Overdrive is not a realistic game. Insomniac's creed while developing the game is "fun trumps realism", something which is especially noticeable in the large arsenal of weapons. Among the more than twenty weapons in the game there's a weapon which fires teddy bears that explode on impact, a weapon which fires propane tanks and a sword which the player forges in a nuclear reactor. These weapons can be upgraded using amps, making them even more powerful. The weapons in the game, combined with the game's combo system, make the gunplay a whole lot of fun.

But the game truly shines while moving around the city using its free running system. There's no restrictions such as in Assassin's Creed where a bad move will faceplant you in a wall: the player is encouraged to constantly be on the move. If the player's on the ground for more than ten seconds, they're doing something wrong. The player can slide over power lines, run sideways along walls and jump between buildings. The controls feel very fast and intuitive, and once you get the hang of it you'll be combining various tricks to dispose of your enemies.

There's also plenty of things to do in Sunset City. Aside from playing through the main quest, the player will have the opportunity to complete side quests as well as the option to take part in various side activities. This, combined with the eight player co-op mode, will hopefully make for a very enjoyable, unique sandbox game.

Retrieved from "https://gameshub.fandom.com/wiki/User_blog:MarkvA/Gamescom_2014_-_Sunset_Overdrive_Preview?oldid=7796"
Community content is available under CC-BY-SA unless otherwise noted.