My very first PAX Prime. Overwhelming? A little at first. I had seen hundreds of photos of various conventions over the years so I certainly knew what to expect but I can definitely say it is still something you would have to experience yourself. Photos just don't do it justice. Elbow to elbow gamers, shoving their way to the next t-shirt, lanyard, or pin, most of which you have to play to win. That brings me to the lines. Hours and hours of lines. How do I know how long they stood in them? Because I did it myself. 4 1/2 hours repeating the same line 4 times just for one t-shirt and a one in who-knows-how-many chance to win a limited edition X-box. Not all lines are that insane, most averaging around 45 minutes mid day.

Every day produced a full schedule of panels including everything from how-to-plays to game demos, from game and world development to costume and cosplay design. If it was game or social media related, there was probably a panel for that. 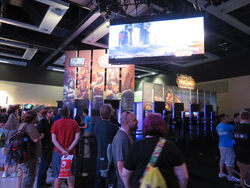 I was joined at PAX by fellow WildStar Wikia Admin Kat_ChaosReborn and a handful of Wikia-Inc team members. Once we got there, I looked through the schedule and made my plans. Friday, see everything once. Saturday, panels all day long. Sunday, play demos and earn swag. Monday, do whatever I didn't get to do on the other three days. The plan went perfectly! Well, not really. I managed to attend four panels and demo two games by Sunday night. I did however get to talk to several developers of various games and ask pretty much anything I wanted. That in itself was pretty cool. Of course, for the ones I actually liked, my mind would wander off to "I wonder if anyone has started a Wikia for that!". Habit I suppose.

For anyone who doesn't know me (most likely most of you), Wikia calls me an MMO expert. The reason behind that is because I have played many MMOs over the past several years and I know a lot of information about the games I play. I also know what I personally enjoy and what annoys me as a hardcore gamer whether I'm playing an MMO, FPS, Indy or MOBA. A majority of the games at PAX Prime are still in various stages of beta, but here are a few that I will personally be watching. 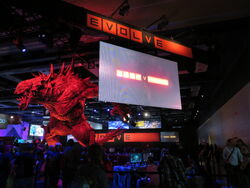 This booth did well to have a very large sculpture of a monster character to draw gamers in, but anyone who enjoys FPS and the hunt will want to check out this game. This 4v1 game is unique in that the 4 are hunters, the v1 is the prey. The 'monster' is set loose and given a head start. That player's first goal is to put distance between themselves and the hunters, the second is to find food in order to prepare themselves for the hunt. The hunters must work as a team to take the 'monster' down, or face their own demise. Strategy might convince a single hunter to stray from the pack, but beware if you do. You could easily become a chew toy. While I personally prefer 3rd person views over FPS, the concept and visuals of this game kept me watching gamers play for an easy 30 minutes and mentally planning who of my friends I will be sucking into this game with me. I have no doubt I will be looking at more gameplay online soon. This game is currently in Alpha stage and will be available to console and PC.

This game is a first person caster in that Magic is your only weapon. You as a player must learn to create and craft spells to survive. There is no mana pool and no cooldowns. It will take skill and strategy to battle your way to victory. Thanks to the elaborate spell crafting system, you can customize your mage to your own personal play-style and figure out which of the thousands of spell possibilities work best for you. Your arsenal includes sigils that represent different elements. During the developer demo were shown Ice, Fire, Kinesis, and Necromancy. As a huge fan of the fantasy/magic genre, I found this game intriguing. After about 20 minutes of gametime, I was seriously tempted to purchase the game online. The only thing missing for me as an MMO enthusiast would be the social aspect. This is a single-player game currently available from Steam for the PC.

I went to a panel for this game where the developers talked in depth regarding where the idea for this game came from and how it developed into what it is today. The panel included Christopher Nicholls, Gwen Bethel Riley, Eddie Kramer, Emily Reese, and the well known composer Inon Zur, whom I was privileged to meet in person after the panel was over. I was also allowed to watch and participate in actual gameplay.

Developed by Harmonix and produced by Disney, Fantasia:Music Evolved takes the next step in directly connecting the player to music through motion gameplay. There are two versions of play available. The standard mode and the new realm adventure mode. In this game, there are no losers. Creativity and collaboration are key. Over 30 songs currently available (3 more with pre-order)this game requires the Kinect and will be available on Xbox 360 and the Xbox one. I don't spend a lot of time on my console but I enjoyed playing this game so much that I pre-ordered online Sunday morning, then dragged my co-Admin with me to go play it again. This was the line I stayed in for a total of 4 1/2 hours to play multiple times. This game is scheduled for release in October and has one and two player modes. Definitely more fun with two. 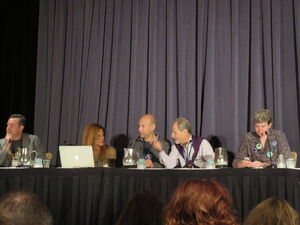 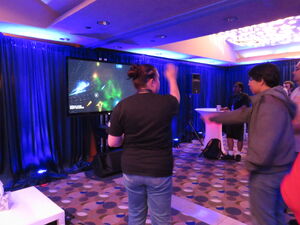 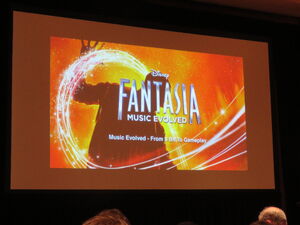 Other games I found interesting but didn't have a lot of time to check out included Gigantic by Motiga, Borderlands:The Pre Sequel by Gearbox Software, Moonrise by Undead Labs, and Strife by S2 Games.

One game that I did spend a bit of time with that was not able to impress me was Wander. This non-combative, non-competitive collaborative multi-player game is set in an open world and encourages you to do exactly what the title says. Wander. You begin as a large tree-like sentient who is eventually capable of shape-shifting, and your main purpose is to discover what and who you really are via the world around you and other players that you might discover along your path. There is no UI so communication with other nearby players is done over voice chat. The game is currently in Alpha, which I found out after noticing a ton of inappropriate clipping during my journey. Given that it is still in development, I won't count this game completely out and I am sure there is an audience somewhere just waiting to spend hours and hours wandering through a forest to find their own meaning of life. I can say with confidence, however, that I'm probably not going to be one of them. It is currently being developed for the PS4. 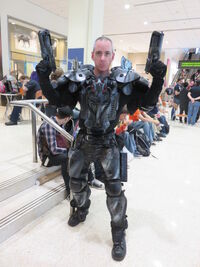 PAX Prime included room after room of tabletop gaming, a very large BYOC room (provided by Intel), tons of vendors, and COSPLAY. Lots of cosplay, some very impressive. I recognized some of the characters being portrayed right away, others not till I had walked through the Exhibitor booths a few times. Friday night my co-Admin and I went to a WildStar Community Meetup provided by Carbine Studios where we (as well as the rest of the audience) were able to help judge a cosplay costume contest. Since we are the Admins at WildStar Wikia, I had no trouble recognizing those characters.

If you ever get a chance to go to a PAX event, or any gaming type convention, I highly recommend it. The best advice I can give is bring a backpack and bottled water and get to your events early. Here's hoping I get a chance to go again next year!

More of my Pax Prime Photos

Retrieved from "https://gameshub.fandom.com/wiki/User_blog:Pinkachu/Pinkachu%27s_Pax_Prime_Review_2014?oldid=8462"
Community content is available under CC-BY-SA unless otherwise noted.