Dragon Age Inquisition is inarguably a huge game. With so many moving parts, systems, and such a large story to tell, blending everything together must have been a nightmare. Fortunately, Mark Wilson and Kaelin Lavallee’s talk at GDC15 about melding the game’s systems and narrative made it seem like it was really "just" a massive amount of time, work, and prototyping to get everything right. Even if a few characters blurting out inappropriate text during dramatic moments still rear their heads every now and then.

Mark and Kaelin started off by illustrating the major points of how they wanted the game’s narrative and systems to interact, and what effect they wanted those two things to have on the player. Check out the image below for a breakdown: 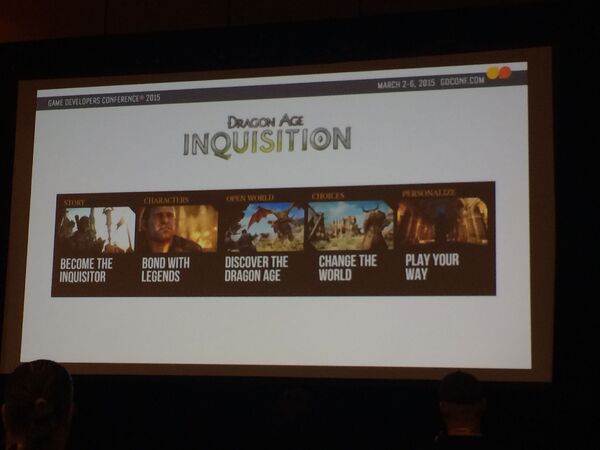 The game had a few major hurdles to over come, including working with the brand new Frostbite engine and an intended 20-200 hours of gameplay. The team had a lot of content to create for the game, but used open, visual storytelling to pad things out. For example, adding some skeleton models to an area or village with no hard story let the player create their own story as to what happened.

The game’s dynamic banter system was also essential, as it allowed for generalized, but still specific, dialogue exchanges between characters. Even so they admitted it could have been better: “Dynamic banter fell a bit short of our hopes”. They mentioned that in some cases it left players concerned they were missing out on important story elements and in other cases wasn’t sensitive enough to the player’s location, current story progress etc. Fortunately, Kaelin seemed confident a more complicated system in the future could help remedy this.

The pair also cited the court approval portion of the Wicked Eyes Wicked Hearts mission as a great example of game systems and narrative blending smoothly. Based primarily on the character approval rating system that affects how a character responds to you, the system was already in place, but created a neat opportunity to make it a bit more transparent and immersive. They also shared a funny early image of the character approval system from an early meeting: 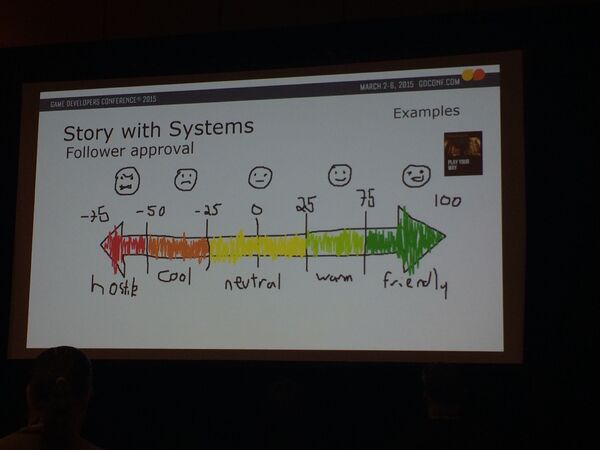 For Kaelin, the biggest area for improvement was the game’s World Master system, a behind the scenes feature that remembered player actions and would randomly generate encounters, enemies, and other things in the future based on their past actions. “I really liked it but I want to see more types of content driven from it.”

In regards to procedurally generated story content, Mark singled out Shadow of Mordor’s Nemesis system for praise: “Shadows of Mordor and the nemesis system is a good start for what I'd like to see."