PAX 2014 is well under way, and we’ve got half of it under our belt already. The crowds, if cabbies are to be believed, have topped 80,000 people. Of course, that’s between PAX and Bumbershoot, which started this morning. Still, even in a city as big as Seattle, popping in that many people is no trifling matter.

We’ve managed to check out a couple of games, and I’ve got a few of my own below. Almost every booth has a long line, so picking and choosing can be a tough decision. Sweat it out at the Blizzard booth? Squeeze through to take a pic that looks like I’m shooting a fireball? (Trust me, work would love that.) 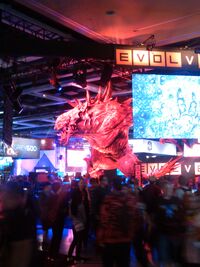 No, I homed in on the big bad in the room, drawn to the twenty foot statue like a moth to a... well, sledgehammer. What am I talking about? EVOLVE. The upcoming beat-up-your-friends or hunt-with-your-friends game from Turtle Rock and 2K. If you’re not aware of it, it’s a wonderful four-person co-op game where you can hunt a fifth friend. Neat, right? Except your friend is a giant monster that evolves over time and, if you’re not careful, will eventually be able to stomp you into little bits.

Most of the gameplay I’ve seen thus far highlights the dense jungle areas. Fog rolls in, other monsters lurk in the water, and it’s overall a fairly gloomy atmosphere. But there’s buildings and bases as well, with beautiful waterfalls the monster will happily climb. The pace was a bit frenetic once you got down to it. No matter how careful a hunt, teams inevitably begin to fracture as the thing grows stronger. And we learned the hard way: it’s not necessarily a good thing if the monster backhands you into a stream and then runs off? Why? Oh, because of the other monsters that will chew your face off if you forget your surroundings. 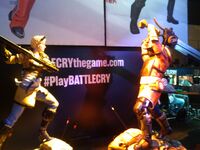 Another game which caught my eye – but I unfortunately didn’t get a chance to play – was BattleCry, an upcoming fighting game from Bethesda. It would have been easy to miss without the giant brain statue (thanks The Evil Within!), the giant television with the absolutely fantastic trailer, or the rather large statues of two of the main characters fighting. I’m typically not much for fighting games, but this one is attractive for a number of reasons: you can have up to 32 players at once, it’s team- and class-based, will be free-to-play, is gorgeous, and isn’t your typical shooting style fighter. Most classes use more medieval weaponry – so your swords, hammers, daggers, bows, and – heck – even fists. It looks like a pretty smooth and fast-paced game from what I could tell, and I personally can’t wait to get my hands on it.

So that’s it for now. Be sure to check out some of the pics below from the conference, including the giant LoL statue, the awesome Assassin’s Creed armor sets, and my favorite cosplay of the day (kudos to whoever figures out the character first!).

Some local businesses got into the spirit.
Add a photo to this gallery
Retrieved from "https://gameshub.fandom.com/wiki/User_blog:Raylan13/PAX_First_Impressions?oldid=8395"
Community content is available under CC-BY-SA unless otherwise noted.